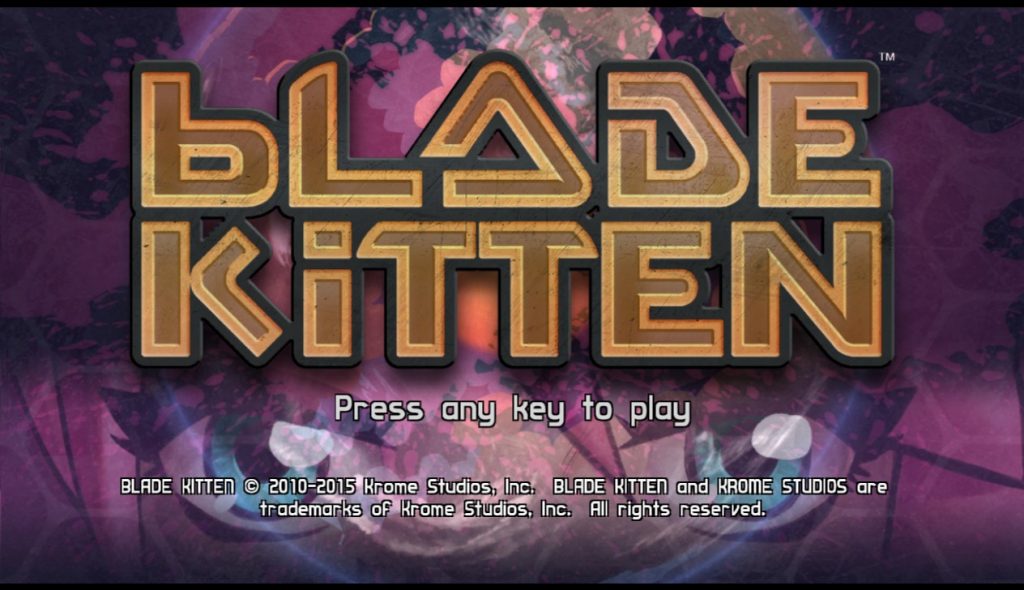 Not a single one of you who knows me should be surprised that this is where I began this column. 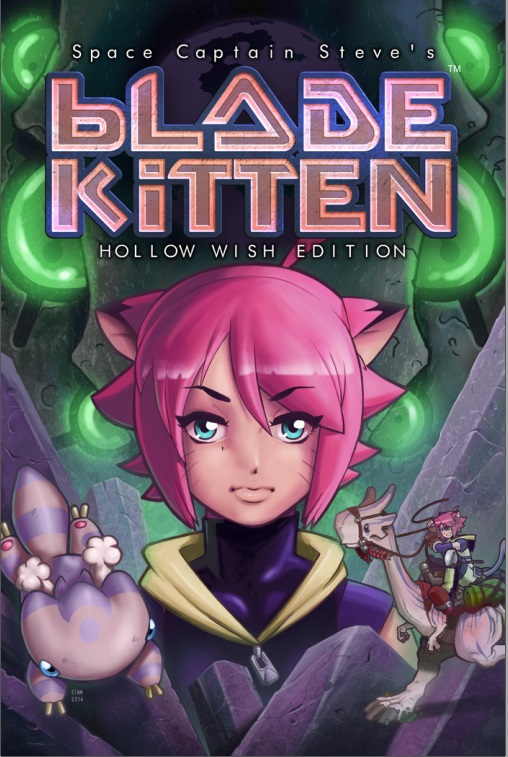 Blade Kitten is a once-upon-a-time1 webcomic about a catgirl bounty hunter named Kit Ballard, who has a floating weapon known as a Blade, so… yeah, the title is a bit obvious.

I’ll be honest, despite the fact that I actually own the complete2 collection of the strip, I don’t think Blade Kitten is a very good comic at all. The action scenes are photoshop filter disasters, even in the last, best-drawn stories… 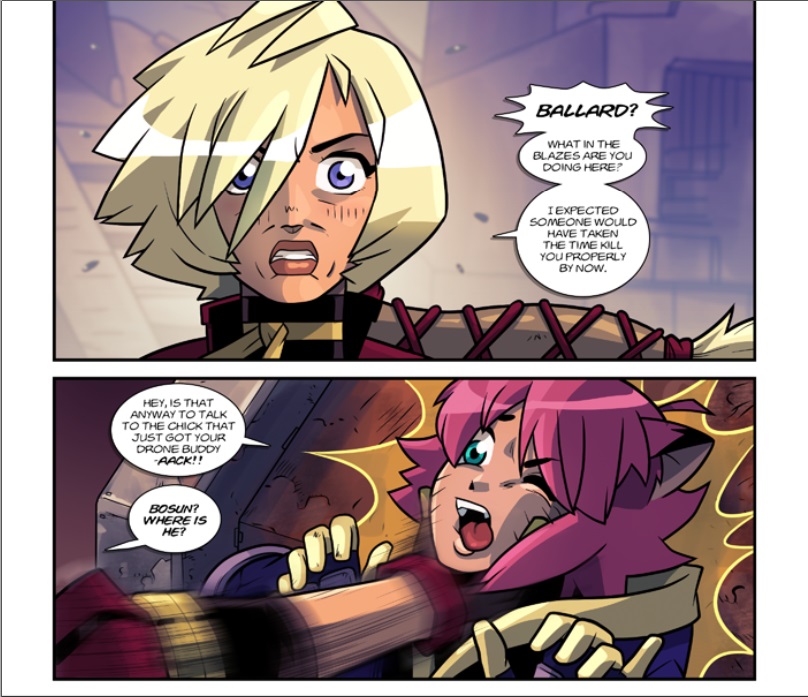 …and the dialogue is not great. 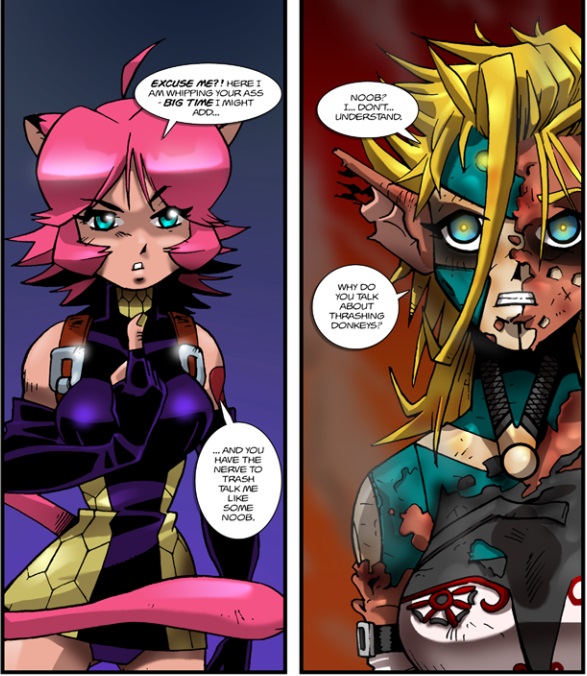 But I’m not here to praise the comic, thank god. I’m here to tell you about how I blundered into this property and it is a spectacular success. In September 2010, Krome Studios, a small Australian developer, put out their first digital title (which was not a raging tire fire – burn in hell, Game Room) on the Playstation Network (for PS3), Xbox Live (for 360, obviously), and on Steam. 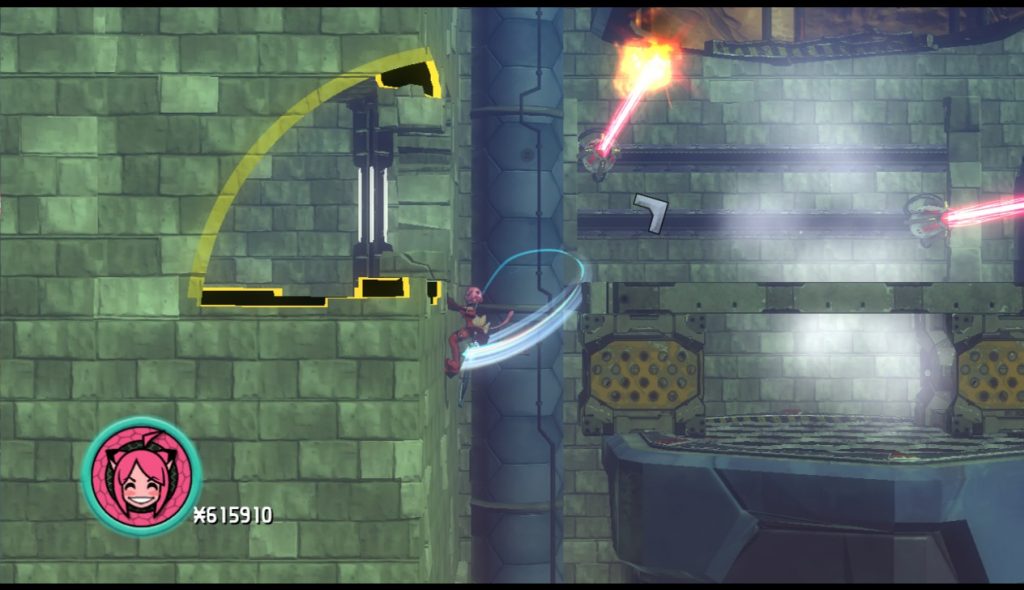 It wasn’t a visual masterpiece, but it was actually a pretty solid budget release on its own right. The game had more than a little depth to it, between hidden secrets aplenty, a combat system that had moves you never get told about but will probably discover by accident, and quite a lot of traversal possibilities. I know at one point I was trying to best my times for a speedrun, especially when I learned how insanely fast you could fly through levels with the blade leap (shoving the sword into a wall and using that to fling yourself upwards like a pole) and careful abuse of wall climbing.

And then I realized that the developers very clearly intended for that, because at least one level let you skip half of it with a well placed blade leap instead of having to crawl through sewers. It even dropped you right into the miniboss afterwards. It was a delight! And the game was clearly a labor of love, because… 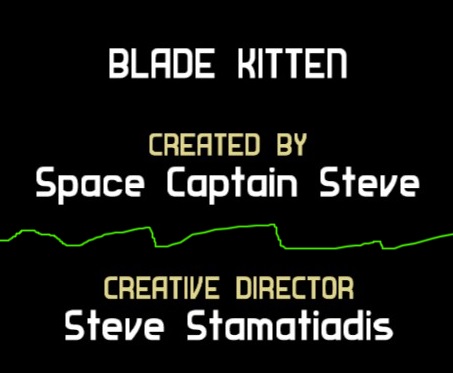 Oh, right, “Space Captain Steve” is the second in command and co-founder of the whole company.

Unfortunately, the saga of Krome and Blade Kitten takes kind of a shite turn at this point, because it wasn’t long after the game’s release, to incredibly rocky reviews3, that Krome Studios shuttered its two studios and laid off all employees in October. It was a month out and for all the teases that the game had a second episode in the wings (with, at the time, entire trailers of new material for that back half being on Youtube), nobody was at the company to release any of it.

For what it’s worth, there was definitely talk of “Captain Steve” and his vision of bringing his baby to life in video game form being a fatal blow to the company, including some quotes from ex-Krome staff in this IGN piece at the time taking him to task. If you aren’t of the type like me to enjoy three page dry articles about the behind the scenes of a closing work for hire dev:

“When questioning former staff about their theories on the company’s downfall, some recurring themes emerged. Among them: a too-heavy emphasis on work-for-hire projects on behalf of American publishing houses instead of their own IP; the creative Director’s self-destructive obsession with his Blade Kitten game, at all costs; a lack of government support for the Australian gaming industry; the tumultuous relationship between the American and Australian economies in recent years, poor management decisions; and the emergence of international studios whose significantly lower project costs are unable to be met by their Australian competitors.” 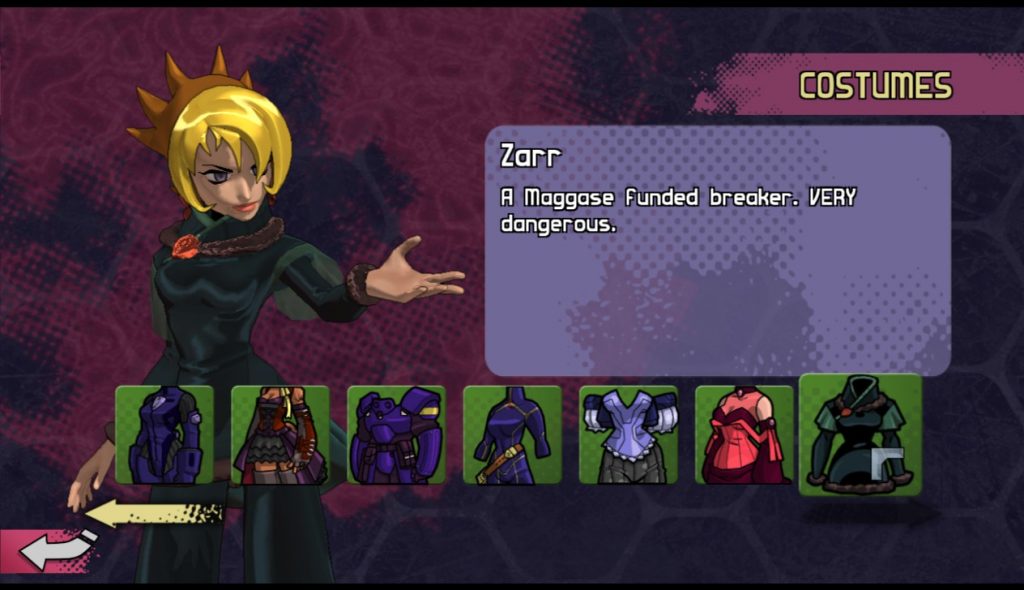 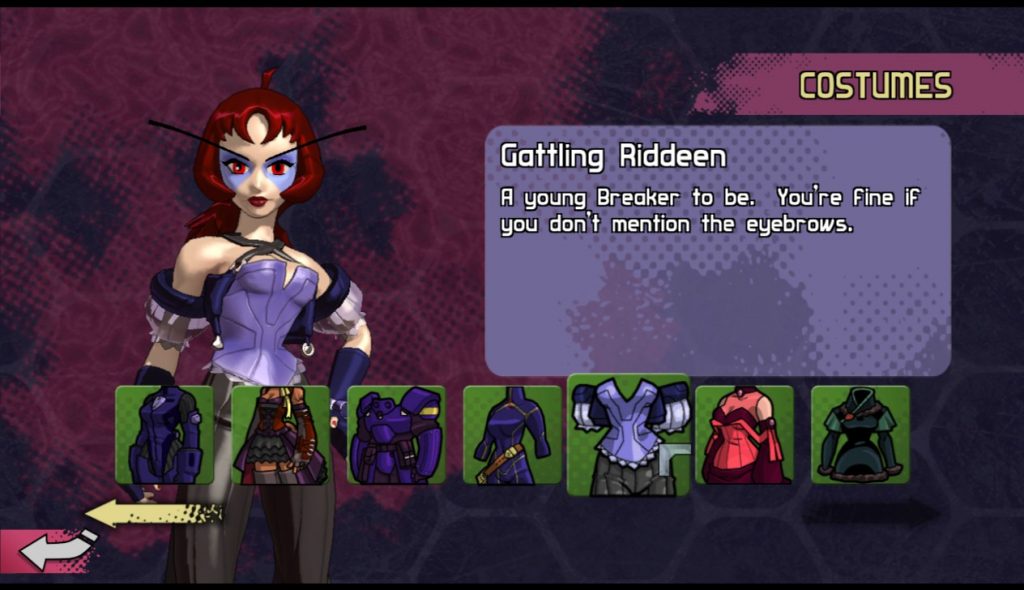 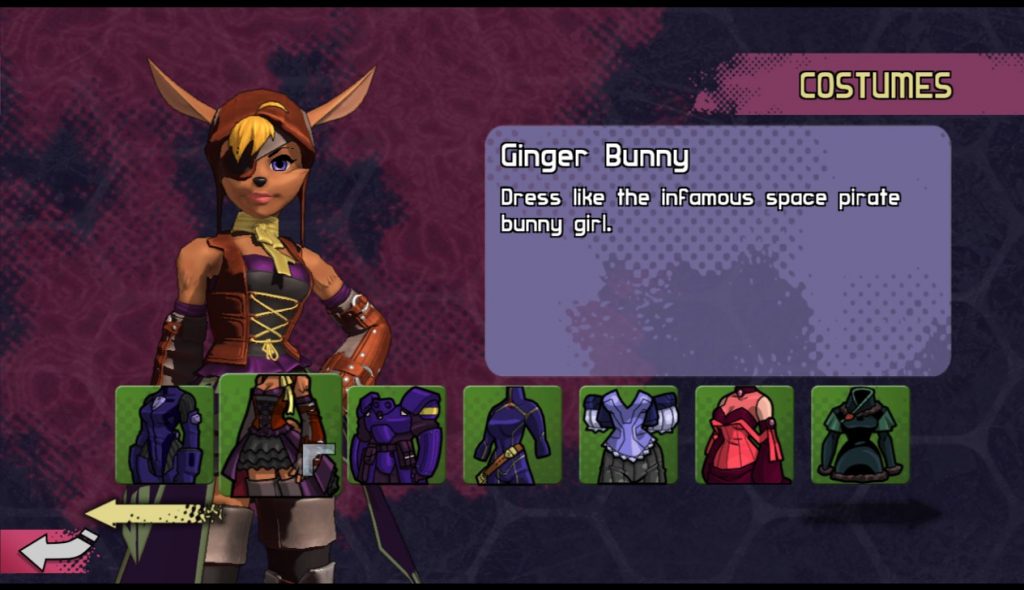 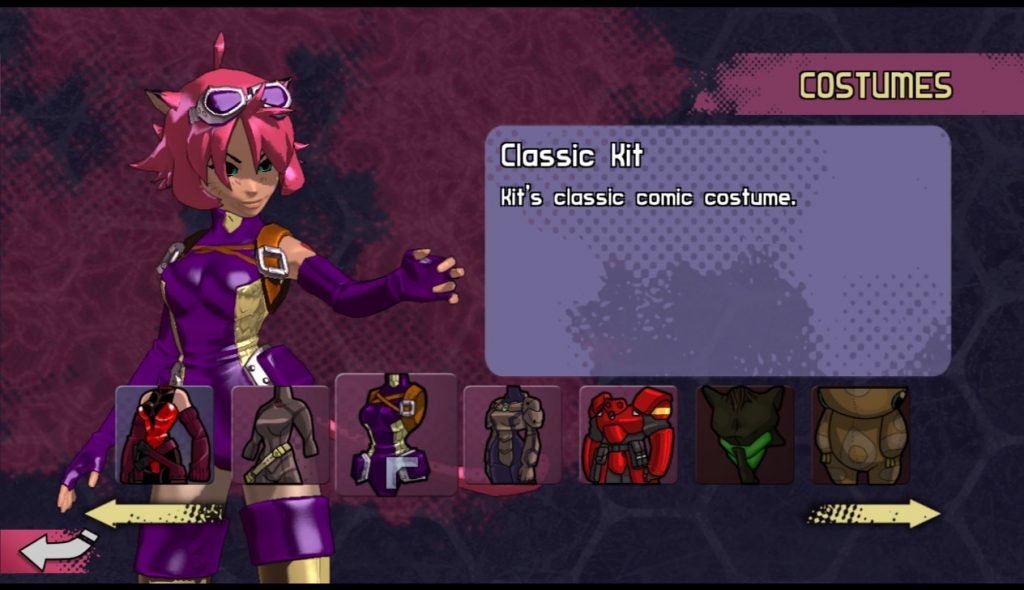 I can kind of see their point, to be fair – there’s a mass of stuff in this game which seems exclusively tailored for fans of the comic (and I guarantee that was a niche of a niche if there ever was one), and in fact, I don’t even know if some of these characters appeared in the series itself outside of brief cameos or mentions by name. I could wager by a huge margin the most recognizable bonus outfit was Ty the Tazmanian Tiger himself, rewarded in the original release for finding every chest in the game. It obviously wasn’t the greatest motivator, though – Steam tells me I’m one of a mere 2.3% of people who ever did4. 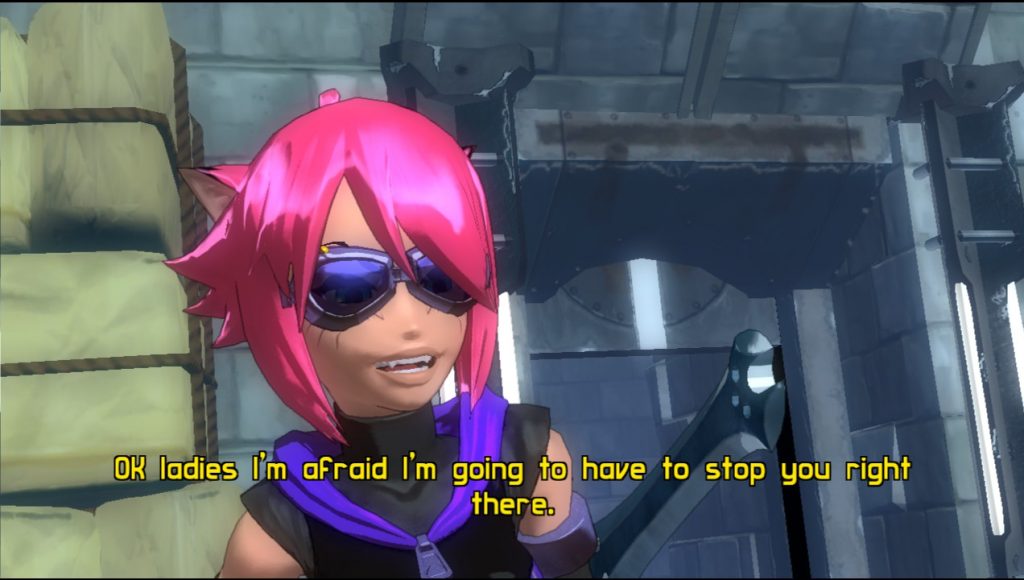 I do not know a lot of the Krome Studios story during the intervening years. At some point, it returned from the dead with a skeleton crew again, and releasing the completed Blade Kitten content became a high priority as a way to get some quick cash. The only problem? Their publisher for the original release had been Atari, a company who you might know to be a four alarm fire at the best of times post-2000s, usually bought up from the last people who ran the brand into the ground, slapped on whatever the parent company didn’t want to put their own name on, and sold off in time for quick cash. It would take four years of struggle for Krome to get the rights back to their own property, and likely more than a little money involved too.

In May 2014, Krome got the license to their own game back, and proceeded to tighten up the engine and fix the bugs that had been sitting in the code for nearly half a decade at this point… on Steam. Two-thirds of the releases of the game would never see closure, and for what it’s worth, Atari is still listed as publisher on those platforms to this day, so lord only knows what the deal was that let them get this far. It would take almost a full year before Episode 2 was released on PC, finally coming out in March 2015. To their credit, a few months later, they would take the already lowered price of $6, and dump the base game down to a mere $3, with the entire package, episodes, soundtrack, and comics thrown in as well, for $7 off-sale. 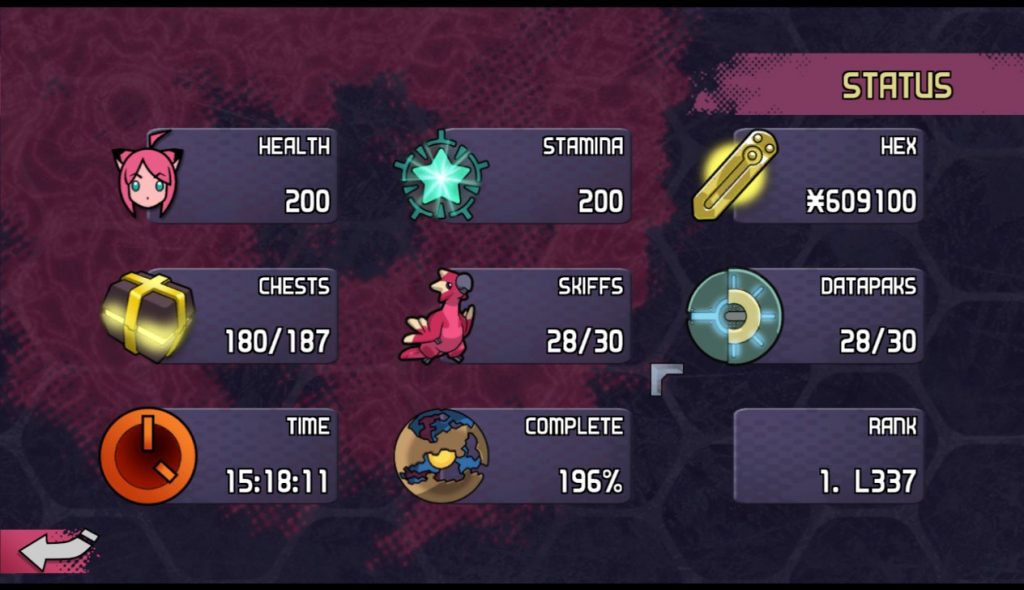 Doing all this research is probably going to get me to pick it back up and try to finish 100%ing5 the game, which I was already incredibly close to. It’s actually funny, I can definitely see that I was a little less thrilled with it by the time of the Episode 2 release, or maybe I was just burned out from the speedrun practice beforehand – all my level times from the first episode are 2-4 minutes apiece, and then my lone runs of the Ep2 content were scouring for every secret I could find, putting me at 20-30 per. I would still wholeheartedly recommend the game, for what it’s worth, I’m just a lot less obsessive than I once was with it. And I do mean obsessive.

See, I would do this thing where I’d buy copies for friends at the slightest provocation, because I was frothing to the point of going “IT’S SO GOOD IF YOU JUST TRY IT, C’MON”. This was not the only title I did this with, actually, but that’s a story for another column… and for now, all I’m gonna say is give Blade Kitten a shot sometime. $7, c’mon. There are plenty of worse things you could spend that on, especially on Steam.

And if you hate everything that comes out of Kit’s mouth, like 99% of the people who I bought it for, don’t worry – there’s a separate volume toggle for voice alone. (I actually think the soundtrack’s pretty good, for what it’s worth.)